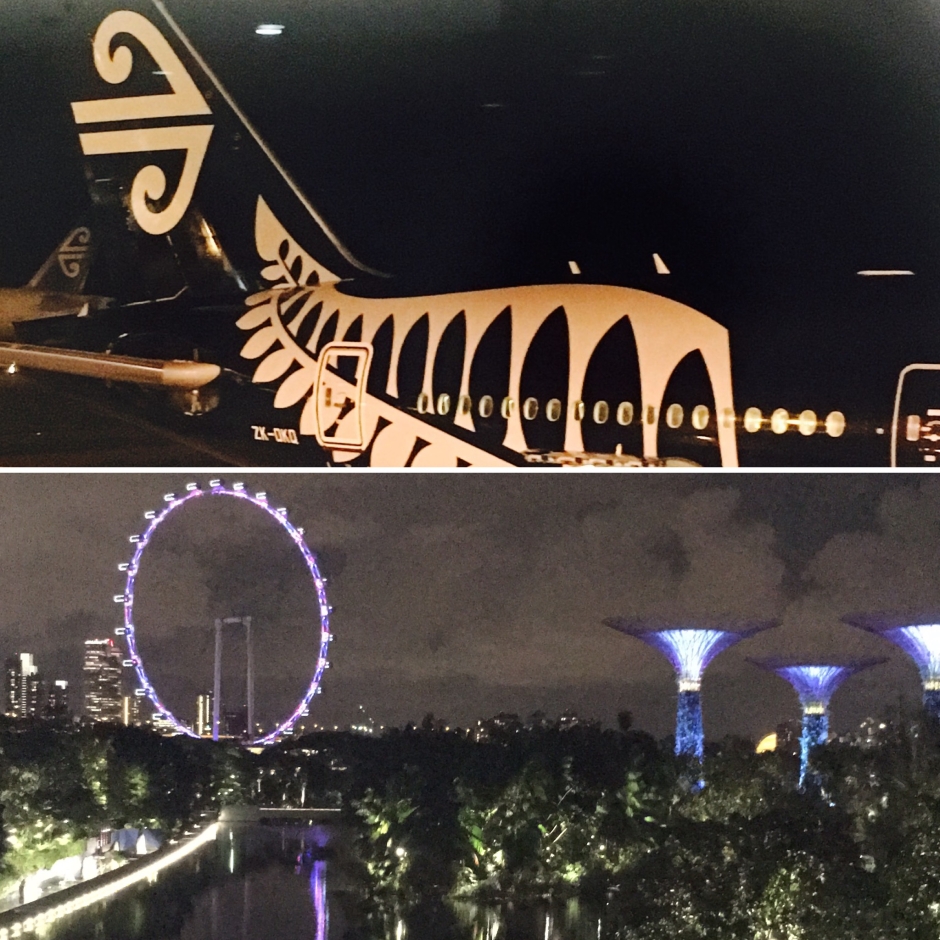 What an awesome 4 days to kick off our world adventure.  We saw some amazing sights, had lots of fun, and had some very tasty food.

Saturday 6th May 2017 was a very long day in New Zealand, our flight to Singapore wasn’t departing until 11.55pm, so it was just a day of waiting and watching the clock tick by.  We packed up from Logan’s parents house and went to have a family brunch at their local cafe, Land and Sea, right on the Marsden Marina, beautiful spot and a stunning New Zealand autumn day. After brunch we headed off to Auckland, picking up my parents along the way. Once in Auckland we had a couple of things to do and then met up with everyone and some more family at a park to let the kids have a good run around and try to burn off some energy. After a couple of hours at the park we said some more goodbyes and then went back to Logan’s brother’s house for our last meal in NZ for a while. At around 7.30pm we decided to go out to the airport and hope we could check in early, which paid off because we could. We had a final drink with both our parents and bit the goodbye bullet and went through customs. An incredibly hard time but knowing we’ll see them soon (Logan’s parents in September & mine in December) made it a little easier.

Braxton was pretty casual about it as I don’t think he really understood how long these goodbyes would be for this time but Lincoln got a bit upset as we went through the departure gate. After a few tears and hugs he was back to being excited again. We went into the Koru Lounge to relax for a bit and take it all in; we were finally about to start our awesome world adventure. We boarded just after 11pm and settled in for a nearly 11 hour flight with Air New Zealand, the boys and I were on a Skycouch and Logan across the aisle from us. We took off on time and we all found a movie to watch. There was a supper service and Logan was disappointed with the usually good standard of plane food we have had in the past. That done, we made up the Skycouch and settled the boys in to get at least a few hours sleep. Logan and I managed a bit of broken sleep and we were all awake with about 4 hours left to fly. A couple more movies and breakfast service (a big improvement on the supper) and we were ready to change countries and time zones – it was now just after 6am local time in Singapore. 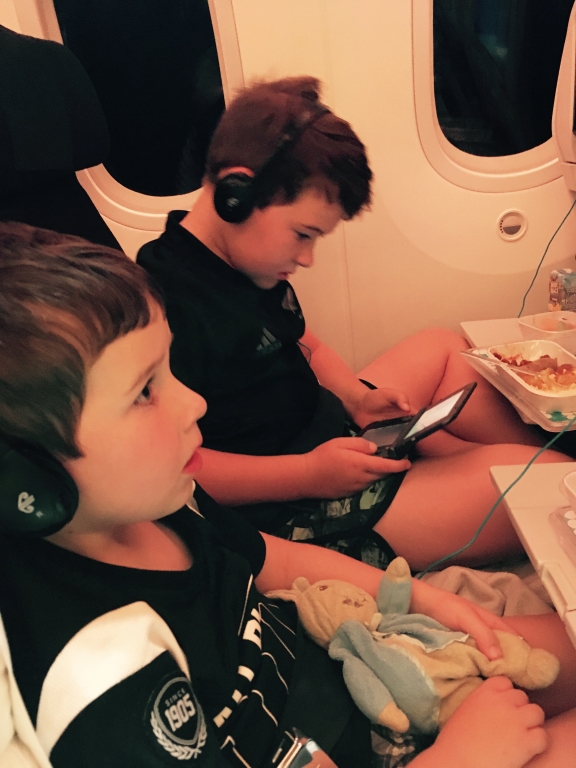 Sunday – We landed in Singapore about 20 mins early, the Changi airport was busy but not crowded. A huge building that ran like clockwork and before not too long we had our bags, were through customs and officially in Singapore. We caught the MRT ($10 SGD/NZD) to the closest station (Tiong Bahru) to where we were staying. Braxton had developed a red and itchy patch under his foot during the flight and didn’t want to walk so we caught a taxi from the MRT station. After a quick detour via a parking building we were at Louis Kienne Serviced Residences for just $3.80 (SGD/NZD). We were told our apartment would be ready around 11am-12pm so we got a bit of local information, left our bags and walked across the street to check out Havelock Street Food Centre. This was an L shaped strip on tiny food stalls behind roller doors, with just a few open when we arrived. We checked out the open ones, where the longer lines were and what the locals were eating and decided on a couple of dishes; prawn noodle soup, pig tail soup (had to give it a go) and carrot cake (which looked nothing like a cake as we know it but was tasty just the same).

The three dishes and three drinks were $14.80 SGD/NZD so after being satisfied with the price and flavour, we wandered down the road, taking in our surroundings in this new country and the warm, humid air. We grabbed a few things from the local supermarket (Fair Price) and decided to head back to the apartment building and wait in the air-conditioned lobby for our room or try to have a swim. It was just before 10.30am when we arrived back and we were told our room would be ready in another 10 minutes, an absolute bonus. We were also told about the complimentary smart phones that would be on our rooms; these would provide us with data, free local calls and international calls to 5 countries (unfortunately not NZ though) and ticket discounts at some of Singapore’s hottest attractions during our stay, another awesome bonus. The pool was calling us all, so we dumped our bags in our apartment, changed and it wasn’t long before we were cooled down and refreshed in the roof top pool. 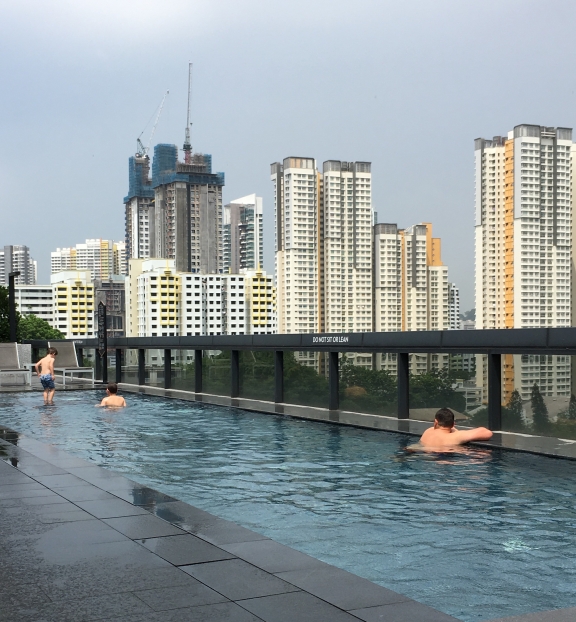 For lunch we checked out another local spot – Beo Cresent Food Centre – just 550m from our apartment. A good selection here, even with some stalls closed. Ha Ha Big Prawn Noodle had just want the kids were after, dumpling noodle soup, and they even had some awards for ‘fine culinary skill’.

Logan and I tried some chicken rice and duck rice sets – all for just $15 SGD/NZD – it definitely hit the spot. More time in the pool to relax and waste away the afternoon and after dinner (takeaways Singapore street food style from another near by small group of stalls) we were well and truly ready for a very early night.

Monday – Logan and Lincoln were up before the sun so Logan headed up to the top floor by the pool to take some shots of a pre dawn Singapore with our new camera. Think they came out pretty good….

After an early night and deep catch up sleep, we were ready to explore Singapore further, and we did. Walking over 11 kms with two kids in the heat is no mean feat. Braxton did have a few shoulder rides and we had a few extra stops to rest and rehydrate, but we were expecting that. Overall, we all did really well, especially the kids. We decided to get a 3-day unlimited use, tourist pass for all public buses, MRT & LRT.  This was a cost of $30 SGD/NZD per person with a possible $10 refund when each card was returned, so for $20 each we had multiple rides on the MRT over the next 3 days.  Unfortunately we didn’t bring our passports with us that day to prove that Braxton was under 7 years old, (and in Singapore, rules are rules, no matter if he clearly looks under 7) otherwise his pass would have been free under a promotion they were running.  Nonetheless, we certainly made the most of the passes and marvelled at this fantastic public transport system (especially coming from Auckland and what we are subjected to). Clean trains and stations, no graffti or rubbish, and quick and efficient services that you barely had to wait for more than a few minutes before the next train arrived if you happen to just miss one. Today we travelled to Orchard Road first to check out all the amazing shopping options (not that we were about to partake in this level of shopping but it was incredible to see it just the same), we had something to eat at one of the underground food courts and purchased a new laptop. This was something we had already researched to purchase and surprisingly, Singapore was the cheapest country to purchase this item so it was great timing that this would be our first stop.  After this we jumped back on the MRT and headed over to Chinatown. It was interesting to wander through the stalls and the boys purchased a little something with some Singaporean money they had been given by their grandparents and we also had a very tasty, fresh strawberry juice (cool and refreshing). We bypassed the street food here and headed around the corner to the Maxwell Food Court, this was recommended to us by a local, (and friend of Logan’s parents) Yang. He suggested Tian Tian Chicken Rice as it is “one of the best in Singapore”; we found their stall amongst the crowds and vast number of food outlets but unfortunately they were closed on Mondays. A bit of a bummer but we still had so many other options to choose from, which can sometimes make it harder to choose when you see other tables with some amazing looking dishes.

After Chinatown, we headed back to the apartment to have a swim and rest our feet.  Dinner was back at Beo Cresent Food Centre and the boys were happy with another helping of dumpling noodle soup. 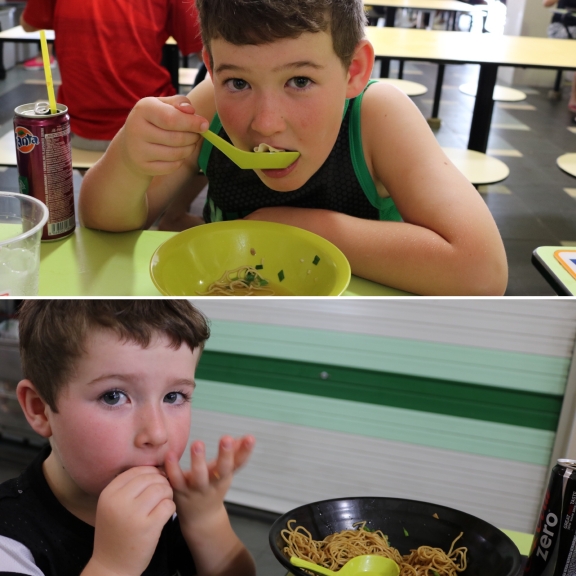 Look out for Part 2, coming soon, for the remainder of our time in Singapore and for a review of our accommodation in Singapore – click here.