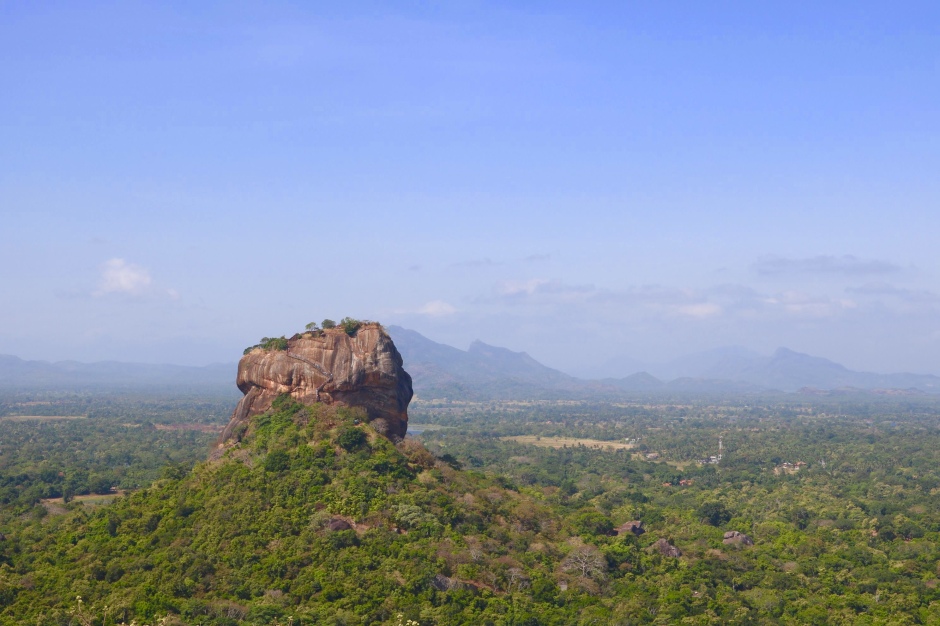 Our final week on the Island of Lanka had us travel back towards the centre and visit a UNESCO World Heritage Site and experience one of our highlights of the month.

At the bus station in Trinco we found a bus that was labelled as going to Sigiriya and then Dambulla and upon talking to the bus assistant he told us we would get dropped at the junction on the main road and just needed to get a tuk tuk into Sigiriya itself which would be a few hundred rupees (around $1.85-2.75 NZD). Seemed suitable enough and we didn’t think much more about it, (including looking at how far the junction was from Sigiriya) so we loaded on board and this bus was just about completely full with Western tourists, the most we had seen on any one bus since being in Sri Lanka. The tickets cost us a total of 650 LKR/$5.95 NZD which included our larger bags. We set off and the bus assistant made sure we got off at the correct junction, now to find a tuk tuk into Sigiriya and our accommodation, which was actually 11kms away. The trip was definitely not going to be only a few hundred rupees!! We managed to get a driver down to 1,200 LKR/$11 NZD and we set off. Through Sigiriya township and heading out to our accommodation, our driver suddenly pulled over to a group of tuk tuk drivers and asked one of them to take us the remainder of the way as he had an “emergency” he had to attend too. We paid the original driver the full amount, he past some over to our new driver and then sped off. In hindsight we should have taken the bus all the way to Dambulla and then got another bus back to Sigiriya, it may have taken a little longer but it would have been much cheaper.

The only reason we came to Sigiriya was to climb Lion Rock; the ancient palace and fortress complex was declared a UNESCO World Heritage Site in 1982 and is probably the most visited tourist destination of Sri Lanka. However, after a few tips about Sigiriya and climbing Lion Rock verses the nearby Pidurangala, we looked into the options and here is what we found –

So with all of this information we easily decided to climb Pidurangala with the kids and we all had a throughly enjoyable day. We headed out early-ish at around 9am but even then we had people coming back down as we were heading up. Nonetheless we didn’t have too many people with us on the track but there was lots of room on the tracks anyway if you wanted to stop for a rest or let others pass by.

I think with some drinks breaks it took us just under an hour to climb and we weren’t pushing ourselves, the boys had fun clambering up and under the rocks and trees for the last few metres and we then had these incredible views to admire. 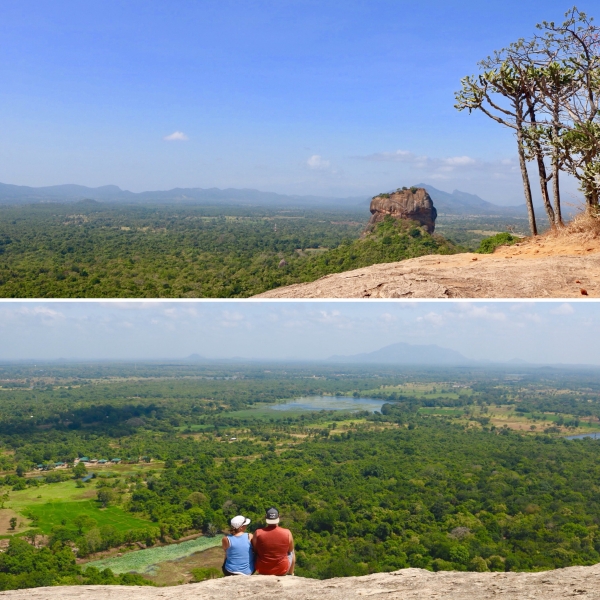 As the morning went on we had more and more people join us at the summit but it certainly didn’t seem as crowded as the stairwells on Lion Rock that we could make out in the distance. We certainly had plenty of room to explore the top of the rock and take some photos of the amazing landscapes. 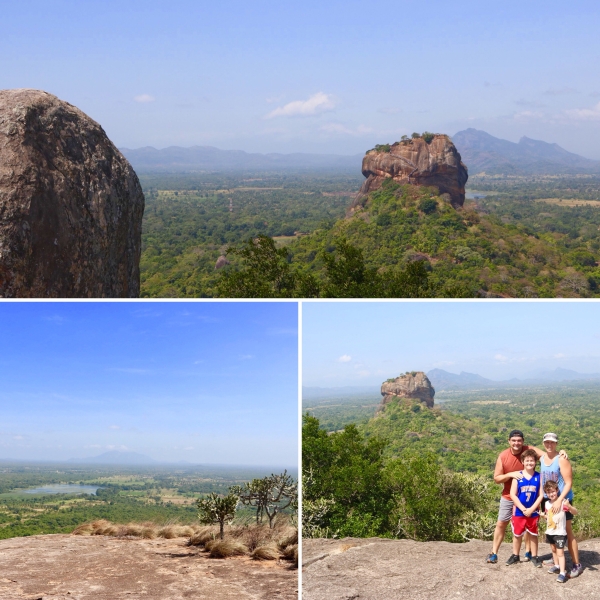 There isn’t too much else to do in Sigiriya and if you are only going to the area to climb one of the rocks you could easily do a day trip from somewhere like Dambulla. We had chosen to stay three nights, (see our accommodation review here) so after climbing Pidurangala one day we decided to use the two complimentary bicycles from our accommodation, head into town, hire a third and then cycle the 4.5km around the outside of the Lion Rock compound. We headed there from Sigiriya town and turned left to head towards the Lion Rock entrance/ticket booth and noticed how incredibly busy it was, even though it was a Friday We later found out it was a public holiday so we were pleased we had climbed Pidurangala the day prior. We had a pretty leisurely ride along the dusty, red track and noticed the signs on the moat advising to take care as crocodiles may be about?? Thankfully we didn’t see any but we found some interesting remains around the outer walls of the ancient fortress and had a pleasant, if not hot and sweaty, ride. 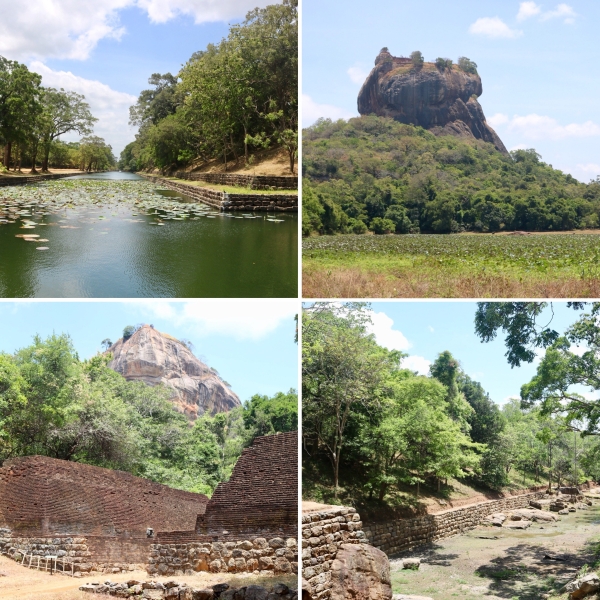 Our very kind host wrote down a simple map to show us how to get back to Negombo and although this was going to be a “three bus” travel day, they were all pretty simple to manage. From Sigiriya we took the bus to Dambulla (the one I mentioned earlier), possibly the slowest bus ever as I don’t think we even got past second gear as we slowly meandered towards the main road and the Inamaluwa junction, where we were dropped on the way into Sigiriya. The 17kms took us nearly an hour and finally at the Dambulla bus station we easily found a bus to our next stop, Kurunegala. This was a 60km trip and thankfully we didn’t have long waits between each trip. We had only spent a total of 540 LKR/$4.95 NZD for the first two bus trips, so at Kurunegala we decided to treat ourselves to a mini bus with actual air conditioning and more comfortable seats on the final leg to Negombo. It wasn’t too much more than the open windowed buses we had become accustomed to and was a nice way to end our Sri Lankan travel days. This 70km journey cost us a total of 1,000 LKR/$9.16 NZD including our bags and we managed to get dropped off not too far from our accommodation on the way to the Negombo bus station. We then walked the remaining 1.2km as the tuk tuk drivers were asking ridiculous prices and were just couldn’t be bothered to barter with such a high starting point.

We would have liked to have gone further north in Sri Lanka, areas like Jaffna looked very interesting, but because we had needed to detour back to Colombo for a few days and it was coming to the end of our month, we didn’t have the inclination or as much time as we would have liked to travel that far. So we decided to head back to Negombo for a few days before we flew out. The boys would have liked another pool to finish off our days in Sri Lanka but we couldn’t find anything suitable that wasn’t ridiculously over our budget. We found a newly completed apartment near the lagoon, read our review here, to finish out our month.

We didn’t do much in Negombo, all of the boys desperately needed haircuts so we got those done but we couldn’t even find a cinema showing non Bollywood movies. A few walks around the lagoon, being asked repeatedly if we wanted a boat tour and noticing how strongly Catholicisim was represented. 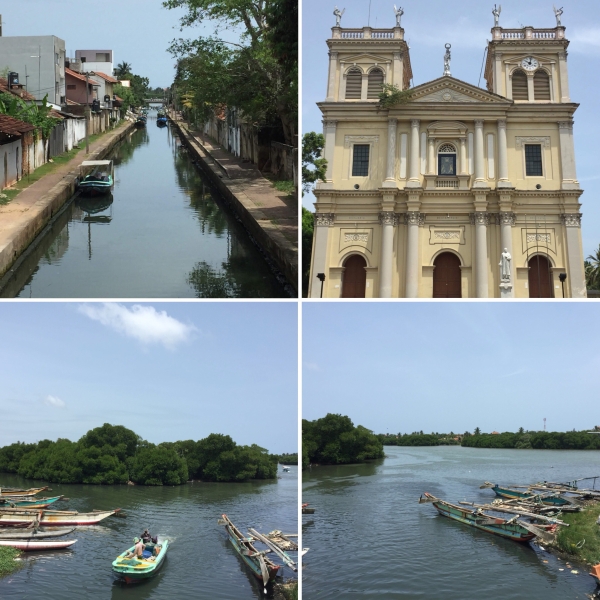 During our month in Sri Lanka we had seen small patches of Catholicism around the country but here is where we noticed the greatest presence – many Catholic Churches, school, hospitals and ornaments for sale. It seems this city was influenced greatly by the Christian faith from the time it was occupied by the Portuguese. 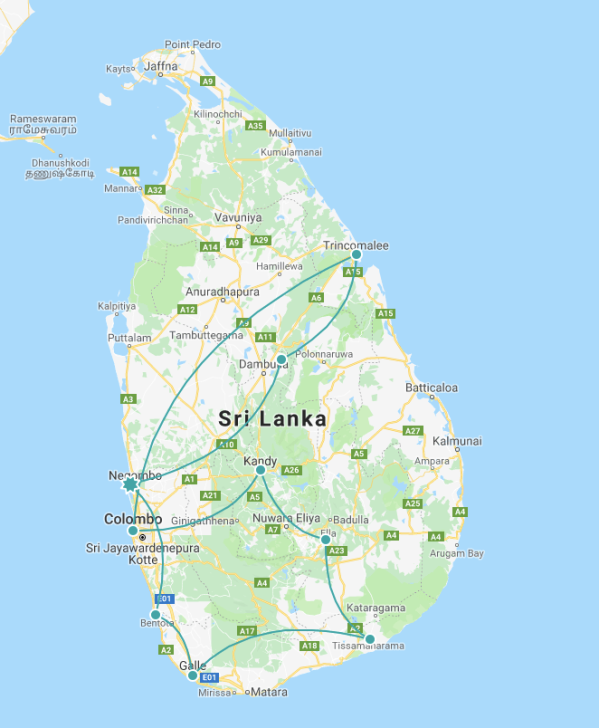 And with that our month exploring Sri Lanka had come to an end. Overall we didn’t completely love it the way we thought we would after hearing so many good things from so many different people, but that’s just the way it goes some times. It was a different experience for our family on numerous levels, we had a couple of special highlights and it has given us many more memories to add to our ever-growing collection.

Next up we were heading to China….