Québec City, oh my!! We thought we had seen some snow before now, but driving into the area we started seeing the hugest piles of snow we had ever seen.

From our petsit in Bath, Ontario (A), we travelled just over five hours back to Québec Province and City. We were actually staying directly across from Old Québec in Lévis (B) and we were so happy with our location. Our Airbnb was a two level, two bedroom house with amazing views (read our review here).

Right outside our back yard was a walkway, which was already well compacted with snow, and then the magnificent St Lawrence River. At this time of year, early March, there were huge pieces of ice moving up and down this river. Over the week we watched multiple times as the river slowed right down and changed directions, just amazing.

One of our first activities here was to partake in the annual celebrations of the production of Canada’s liquid gold. Now that spring was here (or near) the sugar shacks were holding their annual celebrations with a huge traditional meal. The province of Québec produces about 70% of the world’s pure maple syrup and it takes around 30-50 gallons (115-190 litres) to make 1 gallon (3.8 litres) of syrup.

There isn’t anything more Canadian than maple syrup, so when we knew we would be on this side of Canada at this time of year we knew we needed to visit a sugar shack. We managed to get a lunch reservation at Érablière du Cap (a 15km drive away) and we enjoyed a maple flavoured meal of homely dishes typical in Québec, plus extra delicious syrup on the side and accompanied by live music (all in French). Lincoln even joined the duo for some lessons on the spoons.

After the meal, the boys had some fun in the snow, cuddled some husky puppies and just to top it all off, we had some more maple syrup! This time poured onto the snow and then wrapped around a stick. Another very cool experience for our family – total cost $76.50 CAD/$85 NZD.

We were staying pretty much directly across from Old Québec and had stunning views of Fairmont Le Château Frontenac, an incredible hotel built in seven stages between 1892-1893 and sitting grandly up on the hill. 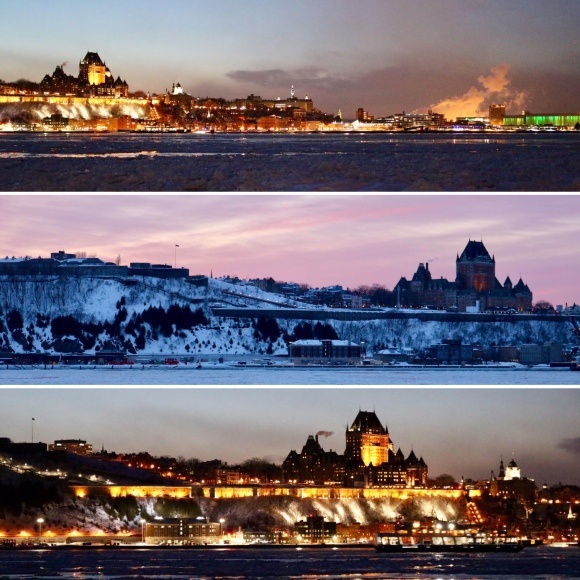 From our Airbnb, it was just a 600m walk to the ferry terminal and after a brief 10-15 minute trip across the icy river we were in the heart of Old Québec. The ferry return trip cost us a total of $24 CAD/$26.67 NZD. We then cheated and took the very short funicular to the top (total cost $10.50 CAD/$11.67 NZD) and had stunning views as we walked around and got a close up look at Le Château Frontenac.

Of course we also had to try “Les Glissades de la Terrasse” (aka “the slips of the terrace” or toboggan/sled ride). Apparently you can get going up to 70km/hr, it was quite steep looking down, but a fun, heart stopping ride. Total cost for our family, $10 CAD/$ 11.11NZD.

We then found some lunch and walked around the beautiful Parliament buildings and streets of Old Québec.

We would love to return to Québec City and explore further, maybe in the warmer months – it is such a beautiful spot. 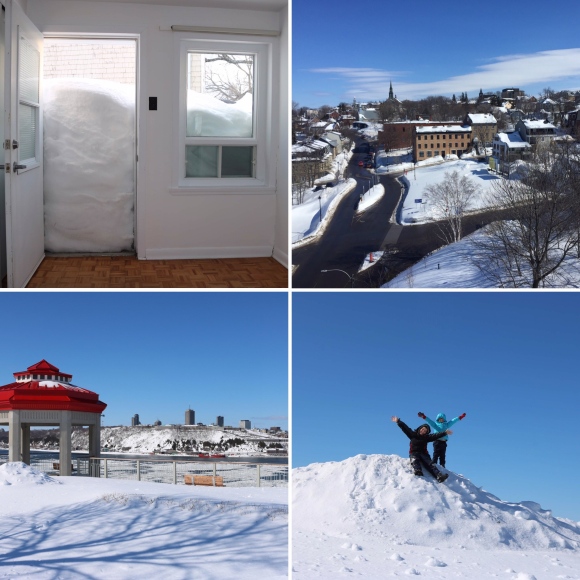 After another incredible winter week in eastern Canada we needed to start heading towards one more Canadian pet sit, this time in Nova Scotia. On the way we made a small stop in Moncton (C) for a couple of nights as Logan had found some interesting things in this area. We had quite a big travel day and drove 740 kms from Lévis to Moncton and had two nights in a cozy two bedroom apartment (see our review here).

Our one day in Moncton saw the temperatures finally back into the positives (5 degrees) and the big winter thaw was happening around the town, water everywhere and dirty yucky snow piles melting, the downside to all the once beautiful white snow. We headed about 40 minutes out of Moncton to Hopewell Rocks along the coast of the Bay of Fundy and the location of the world’s highest tides. Twice a day, 160 billion tonnes of seawater flow in and out of this bay, tides in this coastal zone reach a peak of around 16m. The park itself was ‘closed for the season’ so we ‘entered at our own risk’ and walked through the snow to a couple of the view points. It was no problem but the staircase down to the beach was blocked off. 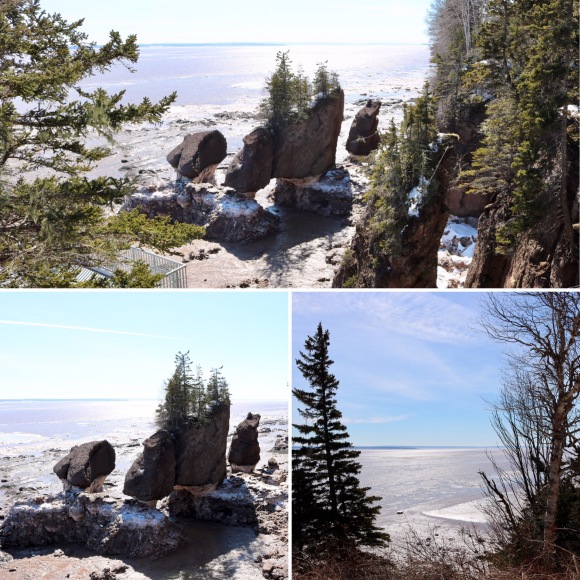 Would be interesting to see this area during the summer, having access to walk the ocean floor and see it at both low and high tides, but it was still quite interesting to see at this day’s 1pm low tide. After our sushi picnic lunch and some snow play we drove back into Moncton to view a natural phenomenon caused by the Bay of Fundy tides, a tidal bore. 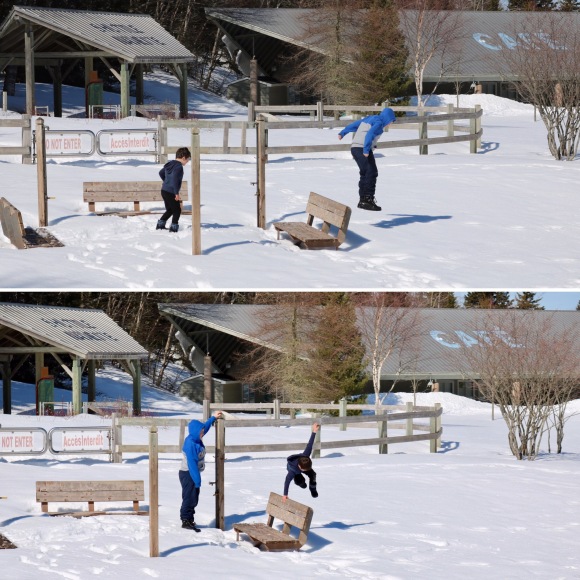 We’d never heard of a tidal bore but it’s the leading edge of the incoming tide that forms a wave that travels up a river or narrow bay against the direction of the current. The tidal bore here in Moncton can be up to about 60cm in height. We walked along the banks of the Petitcodiac River waiting for 4.16pm and “the wave”. 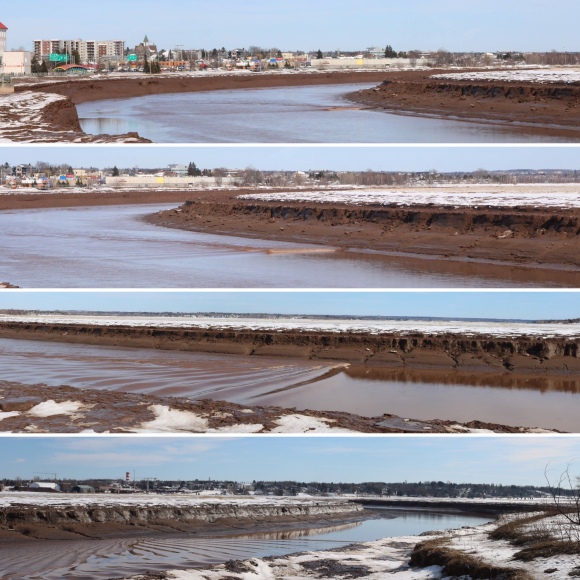 It arrived on time but wasn’t quite what we were expecting and definitely wasn’t anywhere near 60cm, but nonetheless, another “something different” we have seen during our travels. Braxton took a little video of the tidal bore so you can see what we experienced.

One thought on “Incredible Old Québec, a Sugar Shack Feast & a Tidal Bore”

💙💚 Blue Spring, just out of #putaruru, beautiful spot for a wander and a picnic. Such incredible sights, couldn’t believe how clear and beautiful it was 🤩 Wish we could swim, but also glad you can’t and it is kept this pristine 💙💚 The Blue Spring walk takes about one and a half hours each way, starting from Whites Road (State Highway 28), near Putaruru. There is also a shorter walk, 15 minutes each way, to the Blue Spring, accessed from nearby Leslie Road.
💦 Kerosene Creek, a naturally hot stream or “creek” just a 20 minute drive from #rotorua 💥 It was already a warm morning when we visited so we didn’t stay too long but it was an incredible spot. Definitely put it on your list to visit, especially when the months start to cool down. Great little find, surrounded by beautiful native bush and all free.
🎶 Took the boys to their first #concert on Saturday, @six60 at Waitangi Sports Ground 🎶 Beautiful summer evening for the outdoor event, amazing show with an all Kiwi 🇳🇿 lineup and we had such an awesome time. So very lucky to be able to attend these type of events at the moment 🤩
What a crazy 12th year you have had Lincoln and we thought you’d get at least one more winter birthday. Luckily the summer is getting started pretty well here in Northland and you are growing into an awesome (nearly) teenager‼️ Hope you have an awesome 12th birthday 🥳🎂💝 Lots of love always and big hugs, Mum, Dad and Braxton xoxo
Our September trip was a quick over nighter to our ex home city and it was also #kidfree 😄 The boys spent the first weekend of the school holidays with their Grandparents while we went to Auckland. It was a beautiful sunny afternoon and the Viaduct was buzzing so it was the perfect place to start. We visited @oysterandchop for their happy hour and had some fantastic Clevedon oysters 🦪 and Veuve Clicquot Rosé 🍾 Just $29 for a glass of champagne and 1/2 dozen oysters 👌
You are spoilt for choice in the far north of New Zealand with amazing bays and beaches 🏖 We stopped at just three on our slow Sunday trip home to explore some ..... Matai, Waikato and Taupo 💙💚 It was another beautiful sunny winter’s day and we saw quite a few people swimming. Bring on the Kiwi summer ☀️
Loading Comments...
%d bloggers like this: