After nine and a half months of travelling, we had ourselves our first accommodation fail. We first found Otres Marina on Airbnb and then found their own website and booked directly with them for six nights in a deluxe bungalow.

When the driver first stopped at the location we thought he must have the wrong place; but he didn’t, and there was certainly nothing “deluxe” about our prefab “bungalow”. There were large construction sites on both sides and across the road and we later found out the owners have been given notice and need to vacant the land by May.

We were showed to a small room with a double bed which a single fold out bed had been added to. We discussed our need for another bed as per our email booking and another slightly larger foldout bed was supplied. This meant that we then had no room to move around the space and the two small fans were not doing much to ease the heat, particularly with such a low ceiling. 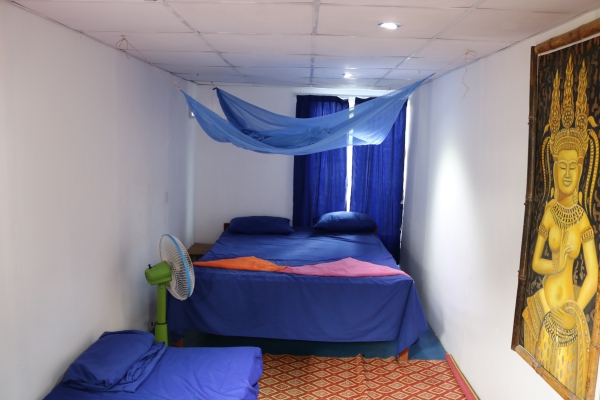 The sink in our “jungle bathroom” was falling off the wall however the shower did have good pressure and temperature control.

It could be due to the fact that the owners will be leaving in a few months but there were many aspects of the property which had not been given much attention of late. Their “river deck restaurant” was a platform over the river that has since become a dumping ground for broken chairs and other items and so we ate breakfast on the dusty, uneven roadside amongst the construction sites and their rubbish.

It is a shame they are using the same images and promises on their website but the hosts were pleasant to deal with and didn’t seem too surprised when we advised them after one night that the facilities weren’t going to fit our needs and we would be checking out.

There are plenty of tuk tuks around and it’s quite easy to hire a scooter/moto.